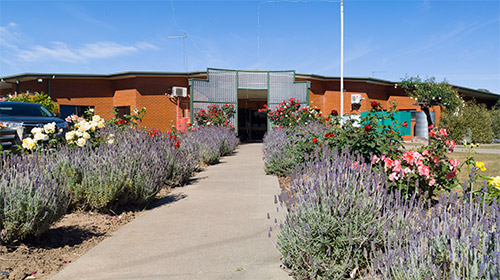 Through the 40s, 50s and 60s the community struggled to keep the Bush Nursing Hospital open even though it was providing a wonderful service. The opening of an extension to the original red brick building was celebrated by the community in February 1957.

In 1963 the hospital lost its doctor as its role changed with demand for acute care and obstetric services declining and that for residential aged care and community based services increasing. The town was now being serviced by visiting doctors.

1985 saw the Violet Town Campus Hospital close and the new 15 bed Violet Town Memorial Campus Home Complex open in its place. The Approved Services (Day Care) Centre became operational in 1987 and two years later the facility was formally recognised by the Commonwealth as a Multi-Purpose Centre and 21 extra beds were added including nine dementia beds and two respite beds.

A 12 bed general purpose hostel - seen as state of the art at the time - was opened in 1992 and five years later VTC was providing care for 37 residents with16 nursing home and 21 hostel beds. In 2001 Community Health commenced operations and the Hume Corridor Community Outreach Service opened the next year.

“At last a GP for Violet Town” was the headline in the local paper, the Euroa Gazette, when the Violet Town Medical Clinic, operating out of the VTC, opened in November 2009. After a gap of 46 years the town once again had a full time doctor, defying the general consensus that this could not be viable in a small town of just 600 people.

VTC’s continued progress was underscored again in 2010 with an additional 12 funded beds allocated, bringing the total to 64.

Recently Bentleys Aged Care in Bendigo was purchase by VTC. This was an exciting purchase to help ensure greater flexibility and long term viability of the VTC.